Fantasy football players have a true passion for the NFL. It’s the #1 fantasy dfs sport for a reason. The largest difference between those that love fantasy football to those who play NFL dfs, is the NFL dfs strategy involved to have consistent winnings.

Take that a step further, you have all different types of players in dfs too. For instance, some simply play the free games. Most graduate to using real dollars, but some never do. On the other side, you have guys that play the big money games. Then, there is everything in between.

The biggest issue: most playing don’t have a single NFL dfs strategy. At the end of the day, that’s such a crucial part of growing your bankroll consistently. At the end of the day, having the proper mix of NFL DFS lineups comes from having a grasp on solid NFL dfs picks, NFL dfs projections, coupled with the right NFL dfs strategy. An NFL dfs optimizer, like ours, lets you leverage all those components easily & efficiently. In this NFL dfs guide, we’ll go over:

Building an NFL DFS Strategy for the Season

The excitement around the NFL is always something. From preseason, the Superbowl, even the draft. It’s not wonder why the NFL is the #1 DFS sport. Thing is, with that volume of players, you need a solid NFL dfs strategy. Sure you can win some here and there, but to win consistently, you need a proper methodical NFL dfs strategy. Fantasy football is a game of skill for a reason!

In order for a NFL dfs strategy to work, you need a systematic approach to dfs. One that can be easily repeated. Not only do you need the right NFL fantasy software to tilt NFL dfs in your favor, but you need a certain mindset as well to pull it off. If you’re able to combine the two, the upside is tremendous.

Get a Handle on Your Bankroll

First up, actually has little to do with our NFL optimizer, instead it’s getting a handle on your bankroll. The last thing you want to do is risk too much too quickly. Not only will you have to make a deposit again, but you’ll get frustrated with the dfs process. To make it even more bothersome, you might give on up on NFL dfs too early.

It’s important to know the types of tournaments and head to heads you should enter. If you start off, you should stick with the 80/20 rule. This is where 80% of your bankroll is focused on lower priced head to heads & smaller entry 50/50 tournaments. The 20% you have left, can be used towards smaller tournaments. Once you’ve hit your stride, you can start making changes to your NFL dfs strategy percentages.

Below, we’ll go into details surrounding others of our strategy for NFL dfs. Remember, the more methodical and systematic your approach is, you’ll strip out the emotion and truly focus on winning on a consistent basis.

The crucial part here, is to focus on key insights, allowing us to strip out the garbage out there. For instance, being able to find undervalued guys plays a huge roll in your NFL dfs picks. The math behind it supports this. For example, let’s say you’re able to get the third wide receiver on the Chiefs for $3500 and the 2nd RB on the Steelers for $3800.

Now, if our insights indicate the high probability of upside here, you are then able to have high end players to fill our lineup. You would then rinse and repeat and change out those non core players to create multiple variations (great for tournament play, not so much used for head to head).

Team by team approach is another. Every week, you include 4 players from the Buccaneers. You don’t do this for all your lineups, but a certain percentage of them. Another way, focus on a contrarian play. Let’s say you have a team that’s 2-6 with a horrible defense, up again an 8-0 team.

On one side, most players will be pounding the undefeated team, but you should have a percentage of lineups going the other way. Not only will you have a significant salary to fill in the rest of your NFL dfs picks, but these players will be so low owned that you can climb up the leaderboard quickly.

Equally important, with our NFL DFS optimizer, we play a huge importance on stripping out the noise, allowing our users to only focus on relevancy. A step further, even if you decide not to use our NFL optimizer, you absolutely should be using one out there! Just remember, all NFL dfs optimizers take some getting used to. So don’t give up too soon on the software. 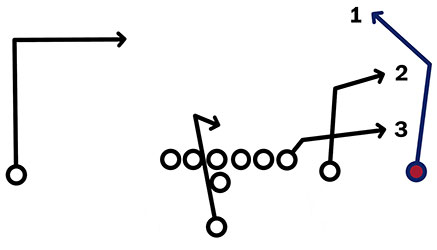 At the end of the day, NFL dfs projections is simply another datapoint in your determination of dfs players to start. It essentially takes past data & tries to predict present results. x

Subsequently, don’t forget, these NFL projections aren’t always right either. I mean, can you imagine if these were! The trick is layering in your insights to create a model of multiple NFL dfs lineups. What you don’t want to do is start overpaying for points per salary spent. For instance, if a $7500 QB only earned you 15 points ($500 per point) but another $4000 QB earned you 10 points ($250 per point), you go with the cheaper QB saving you $3500. You can now afford a tier 1 RB with tremendous upside.

What To Look for in an NFL DFS Optimizer

An NFS dfs optimizer is simply a fantasy software tool to make your NFL dfs life easier. If you have a systematic approach, an NFL dfs optimizer lets you zero in on executing your strategy in a fraction of the time. The crucial insights and the ability to simplify the optimizer output is huge in creating your competitive advantage.

As a matter of fact, we tried a bunch of NFL dfs optimizers over the years. Over that time, there were 2 main themes that we kept finding that bothered us. On one side, you have extremely difficult NFL optimizers. Not only were these hard to understand, you had to spend days of watching videos just to figure how to get started!

On the flip side, there was one NFL dfs optimizer that was really easy to use. I got excited as I thought this might be the one. Only to find out it was simple for a reason. There was no intelligence built in, no parameters to set, it was just too basic. TO make matters worse, the NFL dfs lineups it produced were horrible.

Optimal NFL DFS Lineup – Can It Be Done?

Technically speaking, an optimal nfl dfs lineup is something that wins a tournament. Thing is, 99.9% of the time, winners of tournaments create more than one NFL dfs lineup! So, is that winning lineup really an optimal NFL dfs lineup? No. But what is optimal, is the strategic methodical approach that consistently increases your bankroll.

You take factors such as the volume of NFL dfs lineups to build, min & max percentages, player stacking and relevant insights allows you to create an optimal NFL dfs strategy for fantasy lineups as a whole. It’s easy to get lost in the nonsense out there. If you step back, and look at it from a wider lens, you’ll see it differently. You’ll see that having a methodical systematic approach to dfs, with proper insights and a solid NFL dfs optimizer, you’ll get the edge you’re truly after.

Start by focusing on the undervalued players, those that have a significant chance of earning a high amount of points in comparison to their low salary. Utilize our insights, such as NFL sleepers, projections and picks to get you towards the best NFL fantasy lineups.

How to Consistently Win at MLB DFS Fanduel

Finding consistent winning NFL dfs Fanduel lineups seems like a difficult task. For most, they don’t get ahead. Those are the ones that aren’t using the proper fantasy software tools and are not using the right mindset to execute on a methodical approach to winning at Fanduel.

If you really want to come out ahead on Fanduel, you have to execute on the details in this article. Then be a member of FantasyLineups.com. We offer you a free trial to get your feel for the optimizer. Truth be told, you need to use an optimizer consistently in order for the results to til your favor. We provide the free trial to give you a peak of what life looks like under a systematic approach to Fanduel.

NFL dfs Draftkings follows the same dfs strategy as Fanduel. Sure there’s a salary different between the 2 dfs brands, and sure the scoring system is slightly different, but the same methodical approach with relevant insights, combined with a strong fantasy optimizer, will power you the entire way forward with Draftkings. Keying in on those undervalued players, adding in multiple variations of studs & taking a solid systematic approach to building NFL dfs Draftkings lineups. Ultimately, you still need these 3 areas to propel your growth: